The NITOS prototype wireless sensor mote, is comprised of open-source and configurable modules. NITOS mote features the ATmega32u4 microcontroller running at 8MHz and operating at 3.3V. The aforementioned microcontroller is fully compatible with the Arduino platform that enables ease of software development and provides compatibility with several commercial sensing modules. Moreover, the platform is equipped with an Xbee radio interface that enables communication with the respective gateway. The Xbee module is a tiny device ideal for setting up mesh networks and has a defined rate of 250 kbps. This module uses the IEEE 802.15.4 stack which is the basis for theZigbee protocol. Apart from the Xbee module, NITOS mote can also feature a WiFi wireless interface in order to communicate with WiFi gateways. The developed mote currently features specific sensing modules, an air temperature and humidity sensor, a light intensity sensor and a human presencesensor. Various types of sensing modules and actuators can be further integrated exploiting existing Arduino software that implements several existing communications protocols. The firmware can be easily uploaded through the on-board USB connection. Figure 1 illustrates the developed NITOS mote and the respective gateway node.

The tiny NITOS mote is similar to the typical NITOS mote (described above). It integrates a tiny-size form of the ATmega32U4 microcontroller which is assembled under the wireless interface towards the creation of a lower-sized version. The mote runs at 8MHz and operates at 3.3V. In addition, it features the same characteristics with the typical NITOS mote which implies that it is fully compatible with the Arduino software and all the Arduino-like sensors. 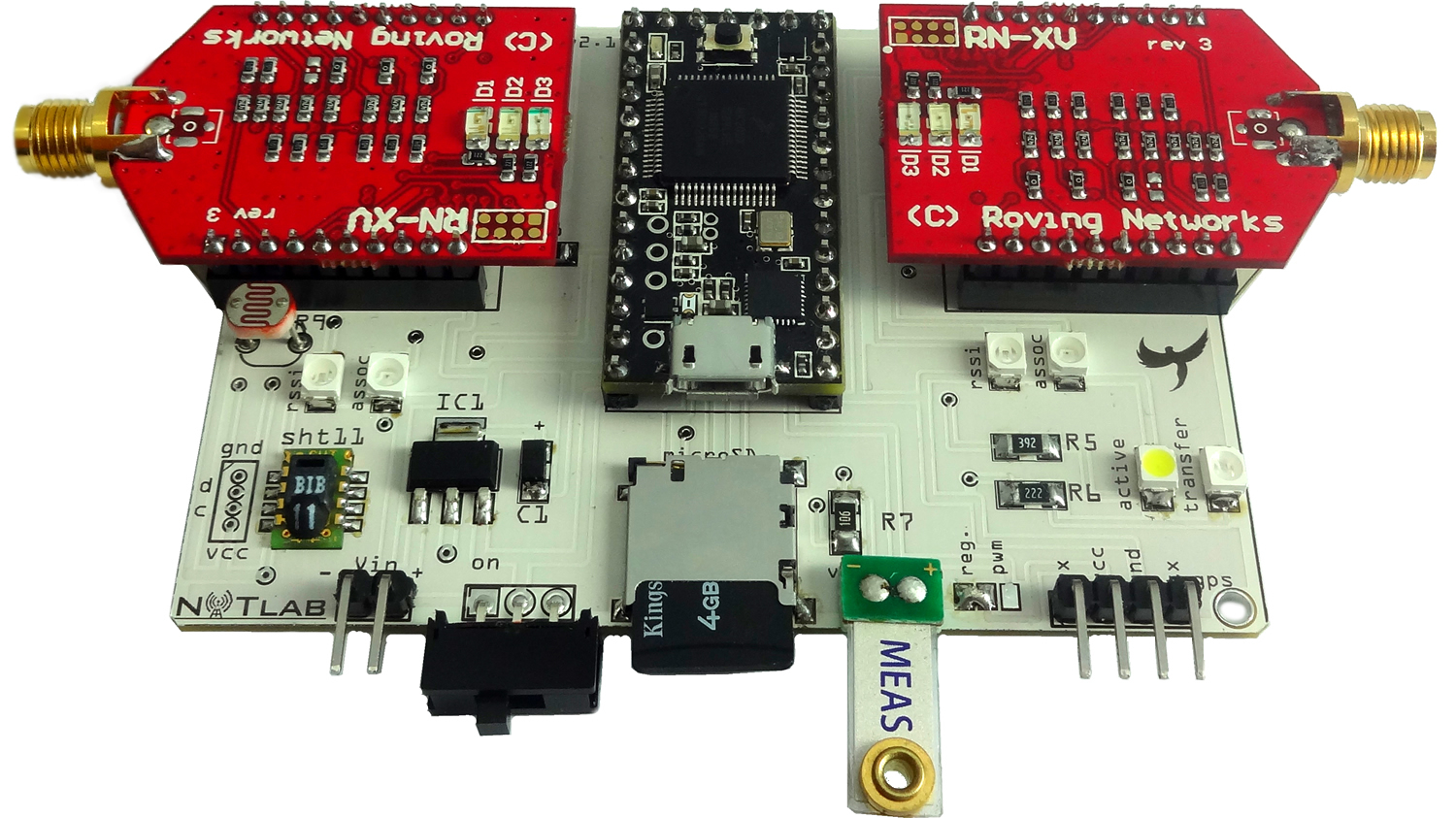 NITOS BikesNet is a remotely controlled city-scale mobile sensing framework based on the bicycles of volunteer users. NITOS BikesNet employs an embedded sensing device that can be easily mounted on a bicycle, enabling the automatic collection of environmental and WiFi measurements in different parts of the city. The NITOS BikesNet sensing device is a prototype electronics board based on open-source and configurable modules.  The core module is a Teensy 3.0, an open-source electronics development board, fully compatible with the Arduino software that integrates a 32-bit ARM microprocessor running at 48MHz. The microprocessor communicates with several sensors and modules through a custom-made shield. An air temperature and humidity sensor is integrated while a photo-resistor is employed to measure light intensity. Moreover, an Arduino compatible WiFiinterface is utilized, configured to operate in monitor mode, so as to collect available WiFi network's statistics, such as SSID names, Received Signal Streng (RSS), as well as the encryption supported from each captured network. Exploiting the aforementioned modules, the developed device senses periodically the existing environmental conditions and networks, as the vehicle is moving around the city. In addition, the device is equipped with a GPS Receiver, which is a small-sized module compatible with Arduino software. This module provides the coordinates of the vehicle, thus enabling for localization of the acquired measurements. Additionally, it reports the exact time and date that each measurement has been obtained. The extracted measurements along with their coordinates and time-stamp, are locally logged in the available micro SD card. Furthermore, the developed device is equipped with a second wireless interface that can be either a WiFi or a Xbee module in order to wirelessly communicate with any available gateway node. Figures illustrate the developed sensing device as well as the installation of it on a bicycle. 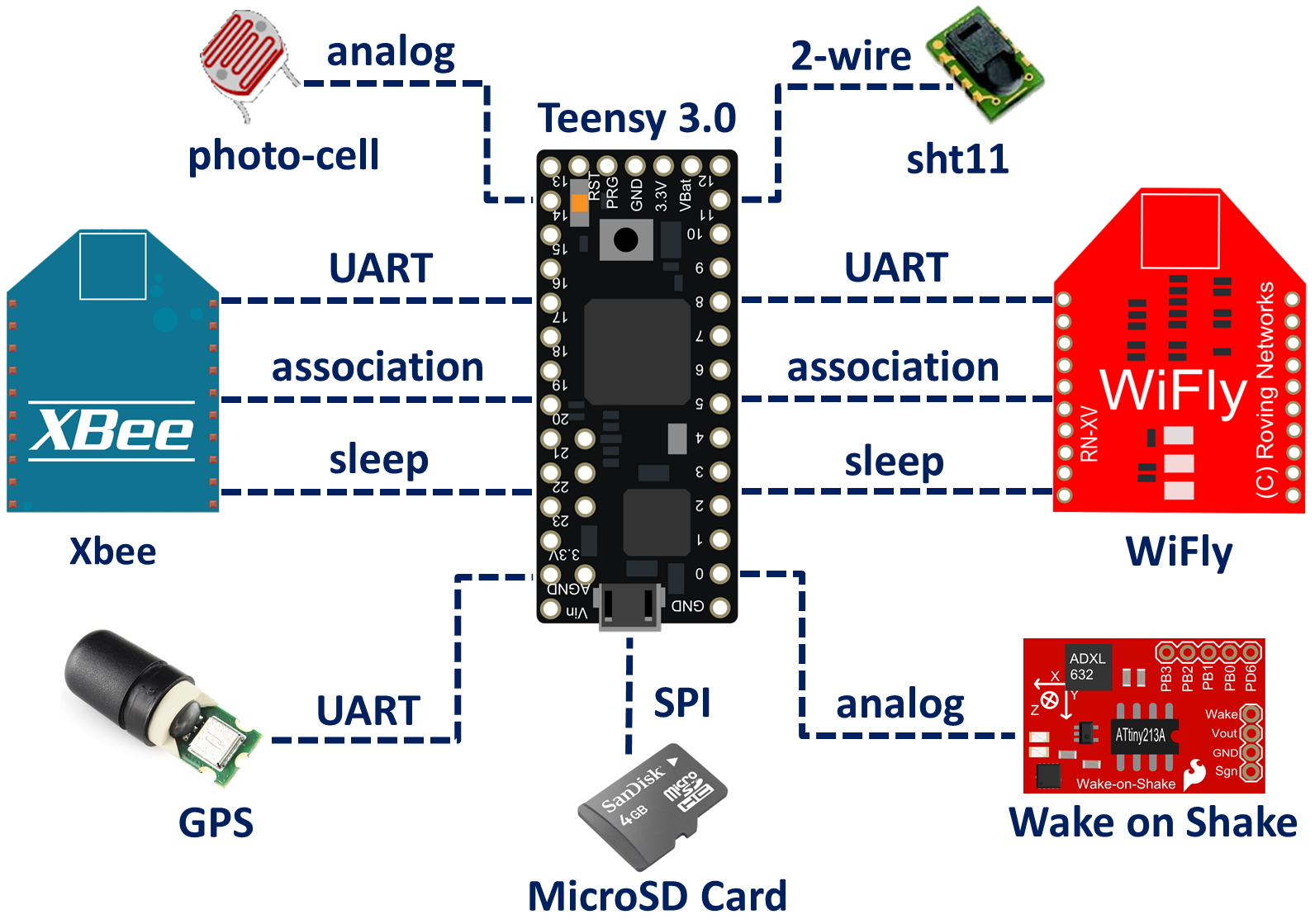