Based on the NITOS prototype mote, NITlab have deployed a pilot Wireless Sensor Network (WSN) in the city of Volos. The NITOS mote has been enclosed in a water-proof box, equipped with external sensors, radio antenna and a solar panel. Sensors measures the air temperature & humidity, as well as light intensity and noise pollution. Temperature, humidity and light sensors are deployed out of the enclosure via waterproof wires, to avoid any interference with node’s internal conditions. Whilst, the microphone is in the box, sensing noise pollution through a tiny hole. The nodes are autonomous in terms of power, harvesting energy via their solar panels charging their LiPo battery via an integrated circuit. The deployed nodes create a mesh network topology over the IEEE802.15.4 protocol. To realize this, we exploited the XBee S1 wireless interfaces configured to run the Digimesh firmware. Digimesh offers network stability through self-healing, self-discovery, and dense network operation. With support for sleeping routers, DigiMesh is ideal for power sensitive applications relying upon batteries or power harvesting technology for power. Exploiting Digimesh all nodes are set up in duty-cycle operation. This means a node is configured to operate in low-power state (sleep mode) and to wake up when it can expect a message from a neighbor node. This works through very precise synchronization of the transmitting and receiving nodes. As a result, the routing nodes will also be in a nearly powerless sleeping state most of the time, achieving ultra-low-power operation. The more accurately the wake-up schedule can match the communication expectations, the less power is consumed by unnecessarily long wake-up periods. Based on this technique nodes consume less than 20uA when are asleep and they wake up only for few seconds when their timer “fires”. The sleep/wake-up interval is configured by the master node, which is integrated in the gateway node, and this parameter is configurable by the user. Figure 1 illustrates the sensing device and two indicative photos of the city deployment.

The deployment consist of 15 nodes and a total of 45 sensing modules and is located in a subset of the metropolitan area of the city of Volos (around NITLab premises). Additionally, a web-based tool based on Google Maps API is developed, allowing users to monitor the obtained measurements by clicking on the illustrated markers, as it is shown in Figure 2. 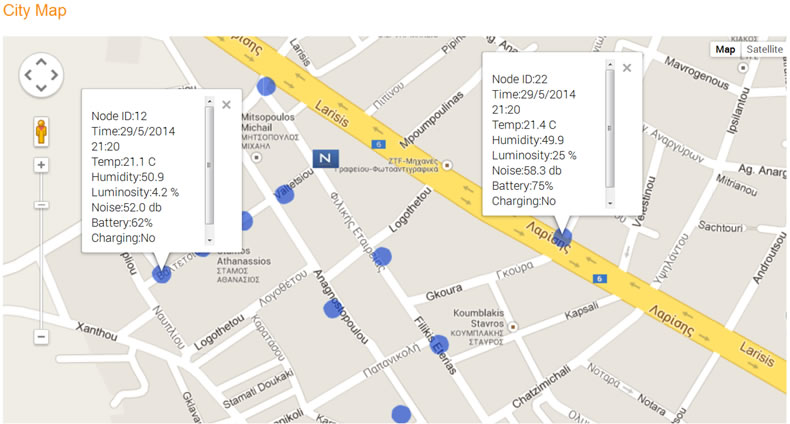 The existing infrastructure is currently being updated to provide measurements regarding traffic congestion in specific routes of Volos city as well as to report availability of parking slots in particular parking areas.