NITOS BikesNet is a remotely controlled city-scale mobile sensing framework based on the bicycles of volunteer users. NITOS BikesNet employs an open-source embedded sensing device that can be easily mounted on a bicycle, enabling the automatic collection of environmental and WiFi measurements in different parts of the city. In addition, the NITOS platform features a unified way for controlling the sensing devices and collecting their measurements via OMF/OML in combination with opportunistic and delay-tolerant networking methods.

NITlab have developed a prototype sensing device based on open-source and configurable modules.  The core module is an open-source development board (teensy 3.0), fully compatible with Arduino software that integrates a 32-bit ARM microprocessor running at 48MHz. The microprocessor communicates with several sensors and modules through a custom-made board. An air temperature and humidity sensor is integrated as well as a photo-resistor that reports the light intensity. Moreover, an Arduino compatible WiFi interface is utilized, configured to operate in monitor mode, so as to collect available WiFi network's statistics, such as SSID names, Received Signal Strength (RSS), as well as the encryption supported from each captured network. Exploiting the aforementioned modules, the developed device senses periodically the existing environmental conditions and networks, as the vehicle is moving around the city. In addition, the device is equipped with a GPS Receiver, which is a small-sized module compatible with Arduino software. This module provides the coordinates of the vehicle, thus enabling for localization of the acquired measurements. Additionally, it reports the exact time and date each measurement has been obtained. The extracted measurements along with their coordinates and time-stamp, are locally logged in the available micro SD card. Furthermore, the developed device is equipped with a second wireless interface that can be either a WiFi or a ZigBee module in order to wirelessly communicate with any available gateway node. Figure 1 illustrates the developed sensing device as well as its installation on a bicycle.

Figure 1: NITOS Sensing Device & its Installation on a Bicycle

The control and management of the mobile resources during the experiment is handled by the OMF framework and the measurement collection is being facilitated with the OMF Measurement Library (OML). More specifically, we extended the existing OMF framework in order to meet our needs for managing an enhanced testbed, which features mobile sensors attached on bikes. The developed prototype can sense and cache the obtained measurements until it is located inside the coverage area of statically located gateway nodes, in order to upload the perceived measurements. Moreover, the delay tolerance of our framework is not met only in the part of measurement caching and collection, but also in the part of experiment orchestration. The commands intended for the mobile sensors are being deferred when connectivity with the corresponding sensors is lost and transmitted as soon as the connection is reestablished. Figure 2 illustrates the architecture of the developed city-wide mobile sensing framework. 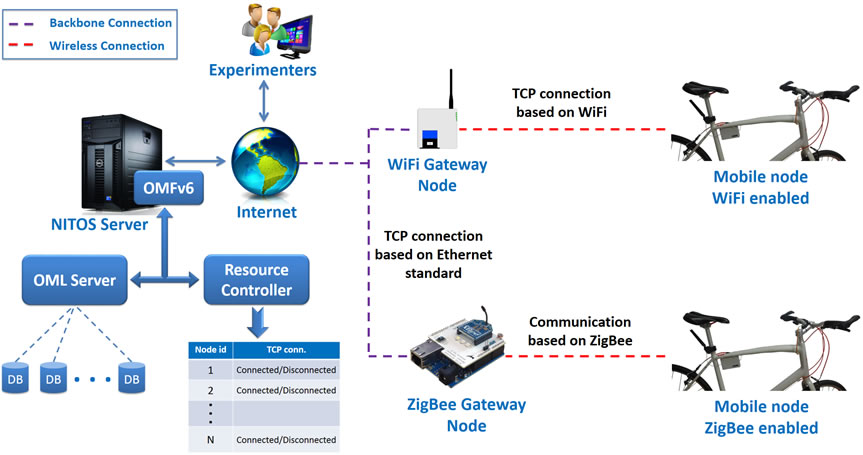 NITlab also developed a set of tools that enable the experimenters not only to depict the raw collected data, but to perform further actions like filtering and aggregating the several measurement points. To visualize and analyze the obtained results in a flexible way, we developed a web-based tool based on Google Maps API. We present indicative results obtained from some first city-scale experiments performed in Volos city in Figure 3. 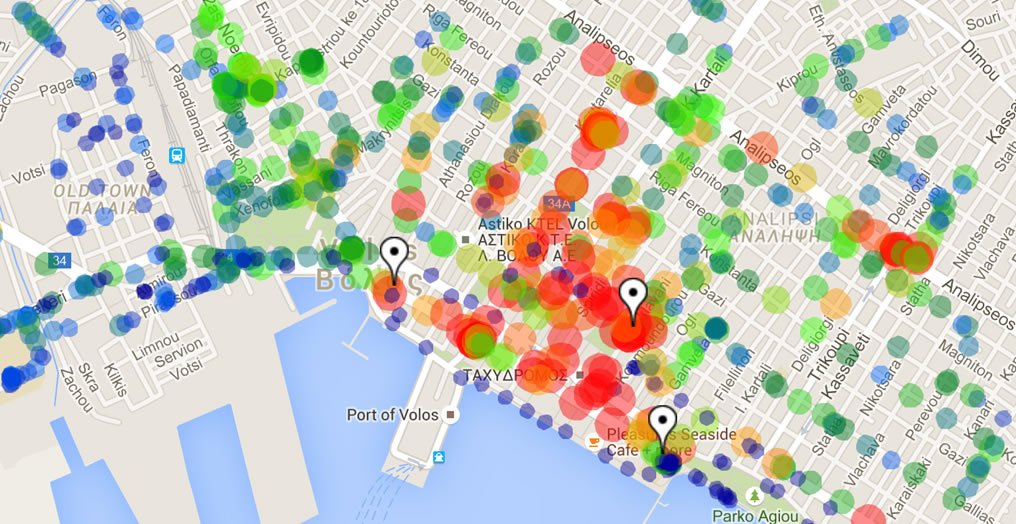